The Ancient site of Minoa, at Moundoulia Hill, above the port of Katapola. It was one of the most important centers of human life and activity on Amorgos throughout prehistoric times and was originally the summer residence of Cretan king Minos. Enormous excavation project reveals evidence that the whole site of ancient Minoa was constantly populated at a high cultural level from the 11th century B.C. to the 4th century A.D.

The defensive wall from the Geometric period with its extensions and bastions which surrounded the acropolis can be made out. The long 4th century B.C. Gymnasium building dominates the archaeological site. The foundation of a sanctuary from the Geometric period has been preserved at the peak of the acropolis. The Hellenistic temple on the far left, surrounded by smaller buildings of worship is impressive with the body of a statue standing alone in the middle. A characteristic building on the south side of the Gymnasium site is the lavatory which has been preserved almost intact with its duct cut into the rock. 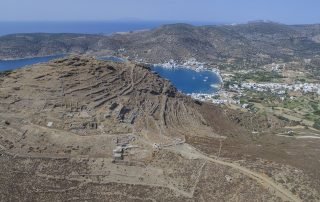 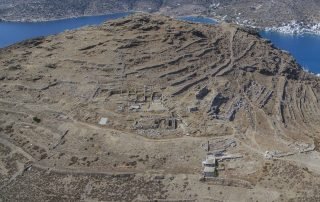 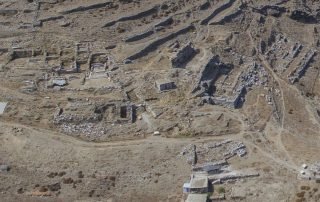 3 km above the port of Katapola on Moundoulia hill

Populated from the 11th century B.C. to the 4th century A.D.

There is a road to Minoa from Katapola but it is also possible to walk there, about 35 minutes. If you walk do not forget to bring a bottle of water.